This week has been another lovely week in Cyprus filled with sunshine, smiles and sea views. There was a small hiccup in the middle of the week as the youngest kitten, Lucky, becoming really sick. One afternoon we noticed he was limping and then he became really tired. The next day he was the same and so we took him to a vets nearby as he wasn’t eating. Unfortunately this vet was pretty rubbish, she just gave him an injection of what we presume was antibiotics, didn’t check his temperature, didn’t check his foot that was sore, nothing…. She just told us to come back tomorrow. Later that night he got a lot worse and quickly went downhill. Dogu took him to an emergency vet and the vet said it was a 50% chance of whether he’d survive. He had a dangerously high temperature and his breathing was bad. They kept him in all night and gave him lots of fluids and started him on a shock treatment of antibiotics. Luckily he pulled through. We have had to go back to the vets each evening for more antibiotic injections but he is returning to his normal self! phew!!!

Apart from the cat drama, the week has been lovely.

We have enjoyed a few wanders into the countryside. It has actually been lovely to do this in the evening because some different birds are around since the last time I was here. There are lots of singing Robins defending their territories. Stonechats are everywhere now, sitting on their thin perches. I even heard a Black redstart a couple of days ago. They have a weird and wonderful song!

We have done some more olive picking this week and finally finished the trees in the garden. Its not easy work! I now fully appreciate olive oil! The time it takes to pick all the olives in a way that doesn’t damage the trees is so long! After we pick them the family sort out which olives will be used for oil and which for eating. The oil ones are taken to an olive press and the lovely elixir is made! The olives for eating are bashed with a stone, soaked in salty water for days, and then are ready! Dogu mixed his olives with garlic and oregano and olive oil and they are just so lovely! So much so that I actually got a saw tongue from eating so many!!!! 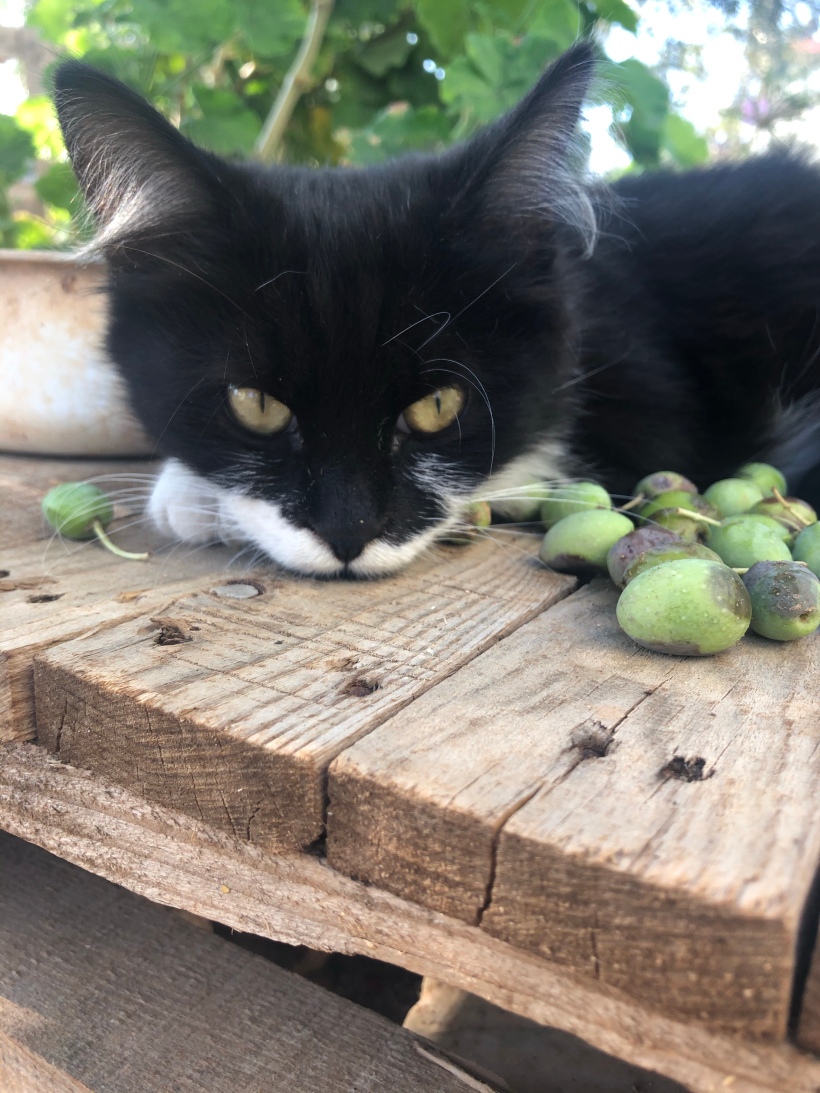 We have been busy in the garden his week. October in turkish is called Ekim and it is related to the word Ekmek which means to sow. We have been planting broad beans which was fun! We are also watching eagerly for the other crops to grow. So far there are carrots, garlic, parsley, artichoke, spinach, kale and sweet potatoes growing! We picked a lot of loofahs this week. A natural, organic alternative to plastic sponges! We have so many!

Other things we have done this week are eat Gozleme (a thin bread type thing filled with cheese or whatever you fancy!). The lady that makes them is so lovely, she always gives us extra treats! She was impressed with my turkish grammar which was nice to hear! We also went to a bazaar yesterday that our friend Deniz helped host. It was full of little stalls which handmade trinkets. One stall was full of homemade crystal bead bracelets and I was sold! A new sunstone bracelet is now in my possession! 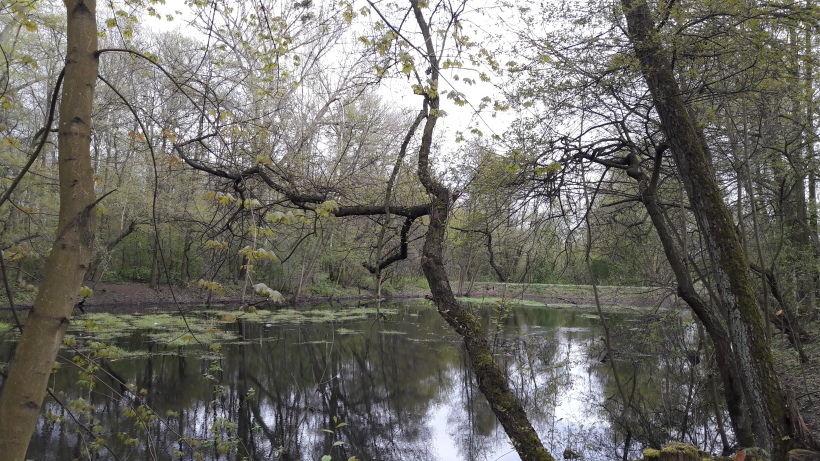 An English, Polish, Lithuanian, Czech and French whirlwind occurred this weekend. Some amazing memories made and new traditions learned.

This Easter has been one of my best yet.

I have eaten so much food and seen so many friends. I think that this has really helped with the slight homesick feeling I have had this week. I think Easter is such a lovely family time and to be away from everyone has felt especially hard recently. But… I have a lovely international family here in Poznan and they have all made it very special. 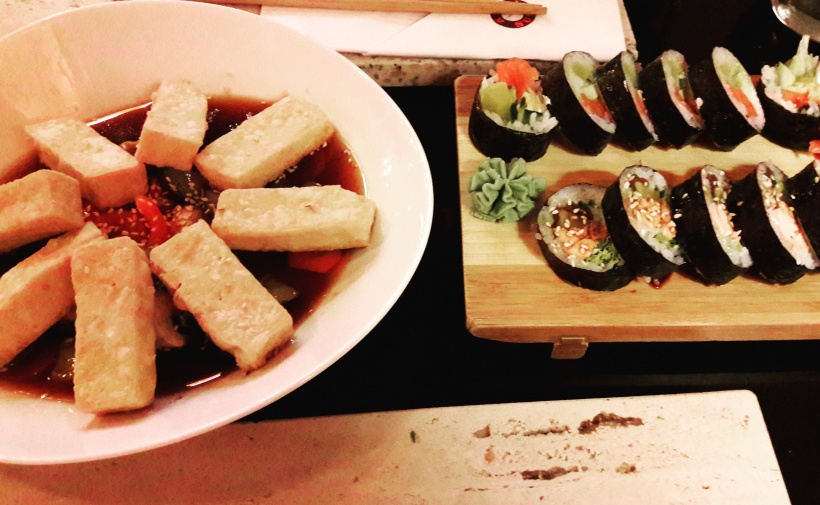 Poznan goes into shut down over Easter. Most places are closed and there are hardly any people around. I guess that a lot of people visit families in the countryside. On Saturday me and Donata went to have some Sushi for a nice start to the Easter weekend. I suppose it wasn’t exactly traditional but it was different and extremely tasty! I noticed that a lot of people were carrying these small wooden baskets filled with food. I later found out that they take this to church to get it blessed and then they have big feasts. That’s cute tradition number 1. More traditions to come… Anyway…The afternoon was spent collecting various items we needed for the Sunday Easter feast. This included a food processor, plates, nutritional yeast, leeks, onion skins, string, tights and feta cheese. A random list I know… The only thing we couldn’t find was the nutritional yeast, I am not sure if it even exists in Poland! We got back to Donata’s flat and made an amazing vegan curry for tea. It was loaded with turmeric, potatoes, chickpeas and quinoa and was lovely and cosy for such a rainy, cold day! After a lovely refuel, we started on the food preparation. We made vegan brownies using sweet potatoes, vegan fudge and a healthy banoffee pie using dates and yoghurt. We also painted eggs!

Now, I have to talk about traditions as I am very new to such specific Easter events. All I remember from childhood is running around the house trying to find a few chocolate eggs hidden by Mum and Dad. I never believed in the Easter Bunny really, but gosh did i get excited when I found a creme egg under a pile of folded towels, or inside an empty mug. Eastern Europe embraces it a lot better. They paint eggs, roll eggs, smash eggs, eat eggs. They also soak and hit girls.. but more on that later. Painting eggs was so fun. Donata taught me the Lithuanian method. Firstly you have to go outside and collect various leaves. This is important. Then you boil some eggs until they are hard boiled. Once cooked, you arrange the collected leaves on the shells. Carefully, you enclose the egg and leaf combination in some sheer tights. You have to pull the tights really tightly so the leaves are firmly pressed against the shell. You should be able to see through the tights and through to the leaves. Tie this bundle tightly and repeat. Once all the eggs are wrapped you then place them in a pot of water and lots and lots of onion skins. And I mean lots. You then boil this magical potion for 10 minutes and leave the eggs in the mixture until cooled. Unwrap the bundles and you are left with beautiful works of art! Amazing! Next year we are going to try turmeric dye, red cabbage and possibly red onion… 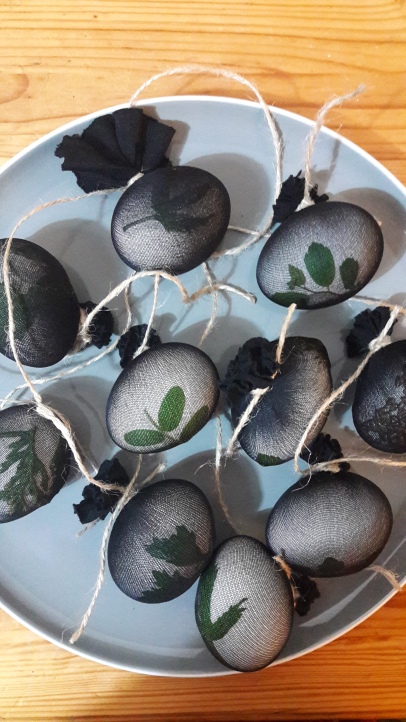 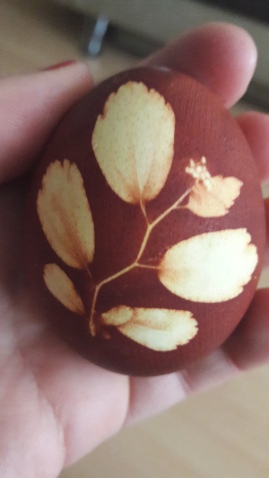 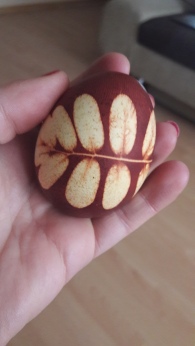 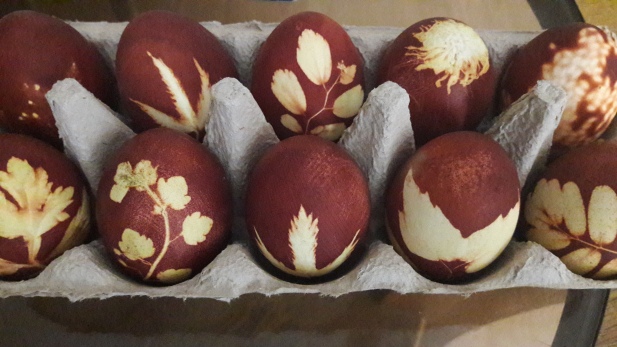 Sunday morning was spent finishing the food preparation for when Simla arrived. We made a vegan quiche using tofu and stuffed some boiled eggs with beetroot and feta or guacamole. Delish! Simla arrived and we finally got to enjoy our different dishes. It was all so tasty. We had an egg smashing competition using the dyed eggs. This involved knocking your chosen egg against the different opponents eggs. Whoever’s egg didn’t smash had good luck for the year. Simla won! Me and Donata, as the losers, had to divide our eggs into three parts so we could each eat a section. Apparently this is good luck too… After lots of food and when there was a break in the clouds we went for a walk in the forest to enjoy some sunshine. There were lots of woodpeckers and the bird song was beautiful to listen to. It was such a lovely day! I arrived back to my flat and was greeted with a little letter off my Mum. That was my favourite Easter treat!

Monday and more food…Mathieu decided to cook a French extravaganza for me and Donata. It was so so tasty! We had blinis, a chicken and pepper stew, rum cake and chocolate mousse. All delicious! We were then invited to Pavel and Marketa’s flat for more Easter food and a film! Here is where the other traditions can be explained… Upon arrival to their flat, Pavel and Hynek (their son) came up to me and Donata and lightly hit us with sticks and sang a song. This is a Czech tradition where boys go around hitting the girls they like… I was informed that because they did this to us after midday I could throw water on them but I refrained! A similar tradition known as Smingus dingus is known here in Poland. Instead of hitting girls though they throw water on them. Apparently boys just walk around with buckets of water waiting for a girl they like the look of. I can inform you that the only water that landed on me was rain… No dinguses managed to get me! Marketa offered us some traditional Czech Easter bread. It is sweet and contains currants and was so lovely. It was a nice relaxing afternoon!

Now I am sat digesting and I am happy that I have experienced such nice new things. Although I am glad I don’t have to eat any boiled eggs for a while now….

I hope you all had a lovely Easter wherever you are!