Again, I have to apologise for the lack of blogs recently. Being back at home I have just gotten too caught up in day to day bumbling about. But, I wanted to write a quick entry about a lovely little trip to Ludlow I had this weekend. 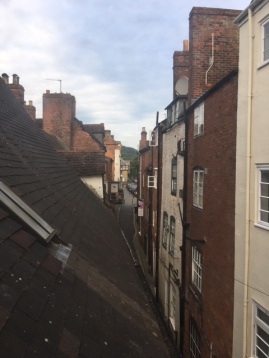 It took us nearly 3 hours to drive there due to bank holiday traffic. But eventually we arrived in the sweet town of Ludlow. When I say “we” I mean me, Dad, Molly and Aileen. We were staying in a higgledy-piggledy apartment full of character from its creation back in tudor times. Nothing was level, everything was on a wonk. It was great. We unloaded our stuff and went on a quick wander around the town. There are a few main streets so it’s easy to get your bearings. The first evening was spent at a lovely restaurant called “Bistro 7”. The food was lovely, the wine and gin even better. The evening ended with a slightly drunken draughts tournament back at the apartment. Dad was the winner. It turns out I’m not very good at draughts … 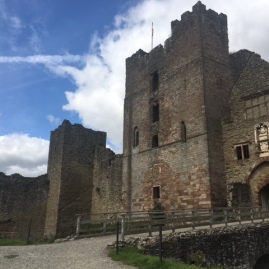 Day two was another potter around Ludlow. This time we went into the market and the different art galleries. Having a walk through the streets let us see all the quirks of Ludlow. Some of the buildings are so old and stick out at all sorts of angles! We also went into the castle grounds. It’s a ruin now, but with a little imagination you can imagine just how grand it must have been. I think I would have suited living back in castle dwelling times. All the door frames were very low, perfect for someone who measures just short of 5 foot 2!! Was there a role as a castle ornithologist? A castle bird ringer maybe? I could have fit right in!.. Whilst we were at the castle we searched for our surname in the database on the computer. It turns out “Wheeldon” originated in Chorley and it literally meant “a farmstead with a water wheel”. We also have our own family insignia which is “Virtue is more excellent than gold”. The database didn’t mention any noble lineage, but apparently the Wheeldon name has belonged to a few good cricket players as well as a convict called Annie who was sent to New Zealand at a mere 23 years of age! After our history lesson at the castle we went down by the river and had some lunch. We then attempted skimming stones, again, this is not a strength of mine. That afternoon we decided to play cards so I taught everyone how to play “shithead”. I kept getting a lot of luck which was very annoying for everyone else. In the evening we had an amazing thai meal and then headed back for more card games. We were addicted!! 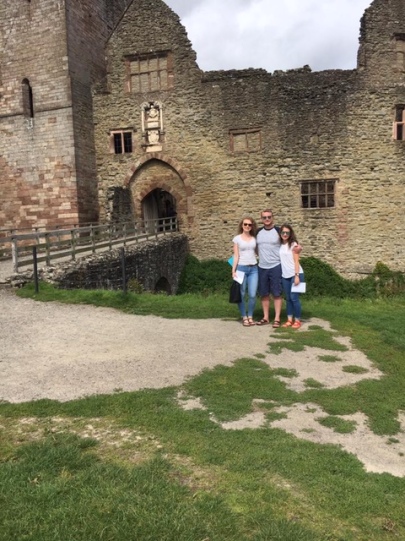 The next day we had breakfast out and then leisurely got ready to head home. We stopped off at Delamere forest on the way back for a walk in the sunshine. Lovely way to finish off the weekend.